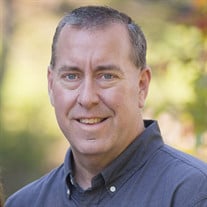 Bradley David Rauchfuss, 47, of Hawthorn Woods, Illinois. Beloved husband of Kimberly Rauchfuss, nee Bosman; loving father of Rachel Ann Rauchfuss, Dean Howard Rauchfuss, Alexandra Jane Rauchfuss; devoted son of Katherine Rauchfuss, nee Aiken and Neil Rauchfuss; brother of Brenda (Scott) Wilson; cherished uncle of Caleb Derks, Alexis Derks, Addison Wilson, and Aiden Wilson. Family and Friends will meet Sunday, November 18, 2018 from 1:00 P.M. to 4:00 P.M. at Morizzo Funeral Home and Cremation Services, 2550 West Hassell Road, (Northeast corner of Barrington Road), Hoffman Estates, IL. 60169. Funeral service will be held on Monday, November 19, 2018 at 10:30 A.M. at Alpine Chapel, 23153 W. Miller Rd, Lake Zurich, IL. 60047; with a Luncheon to follow. Bradley David Rauchfuss, 47, of Hawthorn Woods, IL went to be with the Lord on November 14, 2018, at JourneyCare Center with his wife holding his hand. Diagnosed with colon cancer in August of 2016, Brad valiantly fought through multiple surgeries and six months of chemotherapy. After being declared cancer free for 21 months, his battle resumed with Stage 4 cancer that had spread to his peritoneum. Brad’s strong will to live, faith in God, and the love and prayers of family, friends, and many supporters carried him through three months of grueling chemotherapy and an additional three months in hospice. Brad was born on February 10, 1971, in New Brighton, Pennsylvania to Neil and Kathy Rauchfuss. After graduating from Boardman High School in Boardman, Ohio in 1989, Brad attended West Point Military Academy. Brad then transferred to Olivet College in Olivet, Michigan and graduated in May of 1994 with a B.A. in Economics. This is where he met his wife of 23 years, Kim (nee Bosman) Rauchfuss. Brad and Kim were married in June of 1995. While Brad attended Michigan State University earning his Masters in Labor and Industrial Relations and Human Resources, he worked as a counselor with struggling youth and families at Starr Commonwealth in Battle Creek, Michigan and taught two courses at Olivet College. Upon Brad’s graduation in 1997, he worked for LTV Steel in Cleveland, Ohio and Princeton, Illinois. Brad began working for Kraft Foods in 2001. During his fourteen-year career with Kraft Foods, he worked at the Plants in Chicago, IL., Dover, DE., and Champaign, IL. He worked at Kraft Headquarters in Northfield, IL on two separate occasions. In 2015, Brad began working for Union Tank Car Company - UTLX as the Director of Human Resources in Chicago, IL. In 2017, Brad began working for Fiat Chrysler Automobile in Belvidere, IL. Brad’s career often required him to travel to various parts of the country. He had a love of travel, family, sports, adventure, and history, therefore, embracing his work obligations as opportunities to explore, attend sporting events of all kinds, and sight-see. On his many work travels, he especially enjoyed encouraging and inviting his co-workers to take advantage of new experiences. Brad took great pleasure in being the tour guide for anyone who was up for the adventure. He would then plan family vacations to various places he had visited that he knew Kim and the kids would enjoy. Brad leaves behind his wife, Kim, and three children who each spent quality time with him in various, special ways. Rachel (20) enjoyed attending many Indy 500 races with her dad and would attend any football game anywhere. Dean (17) enjoyed everything football with his dad on the field, attending games, and watching it on tv. Brad spent time with Dean coaching several of his football teams and when the two of them spoke football or strategy, it was as if they were speaking in “code.” Alexandra (14) enjoyed watching classic/war movies and playing board games with her dad. Brad and Kim had so much fun on all of their travels together. They all started with an itinerary outlined by Brad as he would spend hours researching things to see and do. He could navigate any state or country with his map or phone while utilizing every mode of transportation. Brad was smart, confident, strong, and witty. His eyes were the deepest blue and he had a quick sense of humor. He was an extremely hard worker and was a true family man. His motto was, “We do what we need to do.” This was the attitude he took as he approached this horrendous disease with courage and determination. He will be greatly missed by his family, friends, teammates, co-workers and all others he touched. This Life Tributes page has been created to make it easy for Family and Friends to share memories, photos and videos. For further information please contact the Morizzo Funeral Directors at 847.752.6444. Arrangements entrusted to Morizzo Funeral Home and Cremation Services, 2550 West Hassell Road, (Northeast corner at Barrington Road), Hoffman Estates, Illinois 60169. In lieu of flowers, the family has requested a donation to a charity that they are passionate about; the Colon Cancer Coalition

The family of Mr. Bradley David Rauchfuss of Hawthorn Woods created this Life Tributes page to make it easy to share your memories.