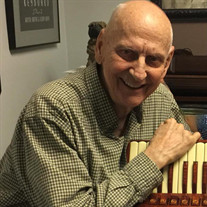 Donald L. Komorski, age 89, of Hanover Park, Illinois. Peacefully passed away August 28, 2021 surrounded by his family. Don was born July 8, 1932, on the south side of Chicago. The son of Leon and Mae Komar (Komorski). At the age of 11, Don won the Morris B Saks Stars of Tomorrow and the Ted Mack Amateur Hour radio competitions on the accordion. He was a child prodigy. He studied with the famed Andy Rizzo Sr. at the Rizzo School of Music for 8 years, as well as studying at DePaul University, and the University of Illinois at Navy Pier. Drafted into the Army, Don served two years in the U.S. Army band at Fort Leonard Wood, Mo. He married Roma G. Rizzo on a weekend pass. They had 4 children. She passed away in 1990. Using the stage name of Don Komar, Don began performing at age 16 and performed at numerous nightspots over his 70+ year professional life span as well as performing a Concerto for Accordion with the Chicago Women’s Symphony at age 18. Most of the clubs are gone today, but you may remember the Chez Paree, Café Bonaparte, Brass Rail, the Pump Room, the Buttery, the Drake Oakbrook, and Seven Eagles to mention a few. Don did some television work including the Playboy Penthouse Show, and the Dirk Courtenay Show (a 13-week summer replacement for the old Topper Show). He has appeared with: Al Morgan, the Harmonicats, Buddy DiVito, Hildegarde, Ted Fiorito, and Gloria Van. He’s played jazz with artists such as Sonny Stitt, Barney Kessell, and Chubby Jackson to name a few, as well as local talent like Joe Vito, Johnny Frigo, and many others. Don added organ/keyboardist to his list of instruments and played as a solo artist throughout the suburbs creating his organ bar following of amateur singers. He was a human karaoke machine playing any song in any key the singer needed. His vast repertoire of music was amazing. He created quite a following playing at Heuer’s, Holiday Inn’s, the Morton House, Sherwood Forest, and Positano to name a few. At the age of 48 Don studied to learn piano tuning and repair and became a certified piano technician earning a Doctorate from the Master Piano Technicians of America. He built his tuning business and busily tuned over 800 pianos a year. He married his longtime friend Anita M Kesteleyn in 1995 and together built A & A Music Academy. The school provides lessons to four park districts in piano, guitar, and drums and teaches over 200 students per week. He taught jazz improvisation to hundreds of students over the years. Several have become professional musicians one of which, Daniel Murphy, played for his 80th birthday party as well as his memorial service. Don and Anita (vocalist) appeared throughout the Chicago suburbs along with Lenny Kaye, tenor sax and vocalist, for many years. Don was invited to a music academy in Alacante, Spain to perform a Jazz accordion concert in 2013. It was a great success. He recorded 3 albums playing his backgrounds on the organ and then “playing with himself” on accordion. Don retired from performing in 2020. Don performed with the Chicago Symphony Orchestra at the age of 82. Don was very adventurous. He became a private pilot and flew single engine planes for many years. He visited his daughter in Wisconsin to take her up for a ride. On another trip he visited his stepdaughter at Eastern Illinois University with Anita where they had lunch. He loved to fly. He also had several motorcycles. The best one was his 1995 Honda Goldwing that he and Anita took to Quebec, Canada on their honeymoon. They rode the bike to several Goldwing rallies around the country. They converted it to a trike when he turned 75. He took it on his piano tuning calls and his customers loved it when he drove up in his leather jacket and helmet! He was always full of life and extremely humorous. Everyone he met has their own Don Komorski story to tell. He is survived by his loving wife, Anita; daughters Leona (Brian) Marheine of Greenville, WI; Claudia (David) Van Delinder of Cherry Valley, IL; daughter in law Elaine Komorski, of Elgin, stepson Steven (Joey) Smith of Elgin; and stepdaughter Christina (Tom) Walsh of Bartlett; his grandchildren include Adam, Heather, Lisa, Brian and Emily, Step grandchildren Ryan and Lisa; His great grandchildren Scott, Emma, Alex, April, and Payton; Step great grandchildren Dacian and Izzy; plus several nieces and nephews. Preceded in death by his parents; his beloved sons Andrew, and Gregory, and his beloved sister Marlene (Robert) Marlowe. A celebration of life will be Sunday, September 19, 2021 from 2:00 P.M. – 6:00 P.M., at Morizzo Funeral Home, 2550 Hassell Rd. in Hoffman Estates, IL. Remembrances and military honors to take place at 5:00 P.M. There will be a live stream during the visitation and services at the Morizzo Funeral Home. To accesses the livestream visit the photo tab above after 2:00 P.M. on September 19, 2021. In lieu of flowers, memorials can be made to the Chicago Accordion Club Scholarship Fund www.chicago-accordion-club.com or the Ontarioville Art & Music League at 1975 Devon Ave. Hanover Park, IL. 60133 For information, please contact Morizzo Funeral Home, Hoffman Estates, IL at 847-752-6444.

Donald L. Komorski, age 89, of Hanover Park, Illinois. Peacefully passed away August 28, 2021 surrounded by his family. Don was born July 8, 1932, on the south side of Chicago. The son of Leon and Mae Komar (Komorski). At the age of 11, Don... View Obituary & Service Information

The family of Mr. Donald Leon Komorski of Hanover Park created this Life Tributes page to make it easy to share your memories.

Send flowers to the Komorski family.