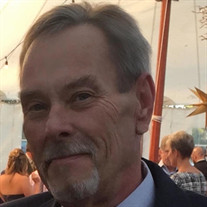 Douglas E. Shuff, 66, of Palatine, Illinois. Beloved husband of Mary Jo Shuff, nee Cerniglia; for 45 years; devoted father of Ally and Aaron, departed this life Friday afternoon October 8th peacefully at home after a courageous battle. Doug was born October 15, 1954, in Rockford, IL to the late Dale and Valerie Shuff. In addition to his parents, he was preceded in death by another life cut too short, his sister, Cindy Moncado (John). He lived out his true passion and talent in a successful 45-year long career as a civil engineer – Robert R. Anderson, McKay Contractors, IHC Construction, PMCS / AECOM. As Senior Manager of projects such as The Chicago Flyover and as a Chief Estimator, he was recognized and earned several awards from IDOT (Illinois Department of Transportation) and from the Illinois Tollway. Doug is survived by his wife, Mary Jo; his daughter Allyson Shuff; his son Aaron Shuff (Randi); his brother David Shuff (Beth); his sister-in-law Paula Shuff; his brother-in-law John Moncado; his nieces Rachael Shuff and Ashley Moncado; his nephews Michael Shuff and Christopher Moncado; his great nieces and nephews as well as many life-long friends. Outside of work and family, his other passions included travel, good food, coaching youth football, and deep-sea fishing. Doug also continuously dedicated his time as a “Big Brother”, and a volunteer for the United Way and The Children’s Home. In lieu of flowers, we ask that you contribute to one of his favorite charities, Big Brothers Big Sisters in his honor. Services will be held at the family’s church, St. Anne Catholic Church in Barrington (120 Ela Street Barrington, IL 60010)on Saturday, October 16th. Visitation at 10:00am followed immediately by a funeral Mass at 11:00am. The family has created this Life Tributes page to make it easy to share your memories, photos and videos. For further information please contact the Morizzo Funeral Directors at 847.752.6444. Arrangements entrusted to Morizzo Funeral Home and Cremation Services, 2550 West Hassell Road, (Northeast corner at Barrington Road), Hoffman Estates, Illinois 60169.

The family of Mr. Douglas E. Shuff of Palatine created this Life Tributes page to make it easy to share your memories.

Send flowers to the Shuff family.