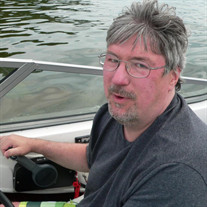 John James Urbanik Jr., 64, of Schaumburg, Illinois. We are deeply saddened to report John James Urbanik, Jr., of Schaumburg IL, age 64, passed away on Monday, February 7, 2022, from Covid complications, including a heart attack and septic shock. While we reel from this catastrophic loss, we also celebrate his life. John grew up on Chicago’s South Side and was a proud part of a big extended Polish-American family. As a child, John played with a soldier kit from his father’s World War II collection. At Mt. Carmel High School, he achieved straight-As and became an accomplished swimmer and water polo goalie, earning the distinction of “All-American” twice in a row. In his 20s, his chess prowess leveled him up to Master class. By his thirties, John’s career took a turn from accounting to information technology. Eventually he moved to full-time work at U.S. Cellular, where he was quite happy. Where John truly thrived was at home. In May 1992, he met his future writer wife at a Goodyear Tire Shop. He had an adventurous streak (think bungee cord leaps and Vegas blackjack), and once persuaded his reluctant spouse into a snorkeling excursion in Cancun, complete with barracudas. John ziplined upside down—in his 50s. He adored his children. In the late 1990s, after his oldest son received speech lessons at the Center for Speech and Language Disorders in Elmhurst, John volunteered to serve as chairman of their Board. Later, John helped build a Pinewood Derby jalopy that roared with the soul of an Indy 500 qualifier, beating the rest of the Boy Scout contenders. Despite his long work hours, at night, John plunged into pool water to serve as assistant coach to his sons’ swim team. In spite of being a coaching novice on the sport of basketball, John submerged himself on winning strategies so he could coach his youngest son’s SAA team. Soon other dads copied John’s shrewd maneuvers. John’s musical tastes ranged from Neil Diamond, the Monkees, Petula Clark, Boston, Led Zeppelin, Kansas, and Pink Floyd’s “Comfortably Numb,” the version with Van Morrison. His favorite movie was “El Dorado,” and he was a “Yellowstone” fan. He was brilliant, outspoken, patriotic and disliked snobs. His curious mind led him to study string theory and quantum mechanics. He loved Tolkien books and Peter Jackson’s film adaptations of “Lord of the Rings.” Author Paul Asay once said: “Forget Batman: what I really wanted to be was my Dad.” Although he never wore a cape, in every way, our John and Dad was a hero to our family. John is survived by wife Cheryl O’Donovan Urbanik, and sons Matthew Urbanik and Ryan Urbanik, of Schaumburg IL. He was preceded in death by his mother, Theresa (nee Kaminski) Urbanik, John James Urbanik, Sr., and his sister, Nancy (nee Urbanik) Fitzlaff-Drux. There will be a Celebration of Life held in his honor on Saturday, February 19, 2022, beginning at 9:00 a.m., at the Morizzo Funeral Home, 2550 Hassell Road in Hoffman Estates, IL. After the services, please join us for a luncheon at Chez Hotel 519 Algonquin Road in Arlington Heights. The family has created this Life Tributes page to make it easy to share your memories, photos, and videos. For further information please contact the Morizzo Funeral Directors at 847.752.6444. Arrangements entrusted to Morizzo Funeral Home and Cremation Services, at 2550 West Hassell Road, (Northeast corner at Barrington Road), Hoffman Estates, Illinois 60169. For those of you that would have attended services and would like to express your condolences to the family, please click on the link above and you can leave the family a message, with the share a memory link. If you wish to send a Sympathy Card to the Family, please feel free to send it to Morizzo Funeral Home, 2550 Hassell Road, Hoffman Estates, Illinois, 60169 c/o The Family. We will gladly forward it on.

The family of Mr. John James Urbanik Jr. of Schaumburg created this Life Tributes page to make it easy to share your memories.

Send flowers to the Urbanik family.