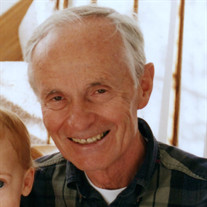 Mark F. Koscak, of Elgin; went home to be with the Lord on September 10, 2018, at the age of 87, after battling Parkinson's disease, vascular dementia, stroke and more. Mark was born in Ljubljana, Slovenia in 1930, to Marko and Mary (Kononick) Koscak. At the age of 14 Mark's father was tragically killed, and Mark became the man of the family. His family immigrated to Chicago, IL, in 1951. He met his future wife, Wanda (A.K.A "Wally," pronounced "Volley") Tiedmann at a German picnic in the summer of 1952, and they began their 62 years of marriage on January 7, 1956. They shared a love of travel that led them around the world to places such as Australia, Hawaii, Greece, Spain, Lithuania, Slovenia and more. As an immigrant Mark started with nothing but God and family. Mark's faith and his willingness to study, work hard and to assimilate into the American culture helped Mark to live out the American dream. In 1953 Mark joined the army and was eventually promoted to sergeant. He received his citizenship in 1954, and was married to Wally, the love of his life on January 7, 1956. After taking classes at De Vry Institute of Technology he worked for Admiral, and then Motorola, as an electronics specialist, until he obtained a job with the U.S. Naval Ordinance. Along the way he obtained his high school G.E.D., followed by an Associates degree from Triton Junior College. He spent the rest of his career working for the government finishing as a highly awarded analyst in the Federal Aviation Administration. Mark didn't limit himself to one career. After normal work hours he began investing in real estate. He and Wally saved to purchase a two flat investment home. Through sweat equity and wise management, Mark worked his way up to a 16 flat apartment building and a 24 flat apartment building. This second career in real estate helped the family to afford vacations, college for all three kids, a summer home on Lake Summerset, and a winter condo in Nokomis, Florida. Ever since the loss of his father, he made a priority of taking care of family, and spending time with them. He loved his six grandchildren, and they lovingly called him Grandpa. Mark was a member of St. Thomas More Catholic Church in Elgin. He served as a Eucharistic Minister, and loved Bible study with his men's group. Mark was full of social grace, and he had a way of making everyone he talked to feel like the most important person in the room. When Mark retired friends of his from work described him as being , "a class act." He applied the appropriate behavior to each situation whether elegantly ballroom dancing with Wally, bringing Holy Communion to the residents at the nursing home, or hosting friends at the cottage. He was very intelligent. He knew more about geography than anyone in the room, and he learned how to do carpentry, plumbing, electrical work, painting, roofing, heating and air conditioning, and more. He was Mr. Youtube long before Youtube. When it came to projects, Mark was known for giving 100%, and taking the time to do the job right. He had a gentle and kind spirit, and treated everyone with respect. This approach gave him influence and allowed him to be a leader. He was passionate about his faith, and in doing the right things, and he wasn't afraid to share that faith with others. He was a great role model as a husband, father and grandparent. He was a man of faith. He will be missed dearly, but the lessons of faith, family and hard work will continue to live on in the many he touched. Mark is the son of the late Marko and Mary (Kanonick) Koscak; the brother of Mary (John) Tiedmann, and was preceded in death by his younger brother John (Maryann) Koscak. Mark was preceded in death by Wally, and his son, Edward Koscak. He passed on in the hope of being reunited with them in eternal life. Mark will be fondly remembered by many surviving loved ones, including his son Mark (Beth) Koscak, of Johnson City, TN; his daughter Jane (Mark) Bedard, of Scranton, PA; his daughter-in-law Kathy Koscak (nee Watry) of Rockford, IL; and his 6 grandchildren, Michael and Matt Koscak, Eric (Becky) Bedard and Nicholas Bedard, and TJ and Caroline Koscak, who loved him dearly. Rumor has it that his only son-in-law Mark Bedard was his favorite son in law! Prior to getting sick, Mark and Wanda lived in Elgin. All of their brothers and sisters lived in the Chicagoland area and have stayed very close, providing a legacy of a faithful, multigenerational, family oriented life. An evening visitation will be 4:00 P.M. to 8:00 P.M.on Friday, September 14, 2018 at Morizzo Funeral Home and Cremation Services, 2550 West Hassell Road, (Northeast corner at Barrington Road), Hoffman Estates, Illinois 60169. On Saturday, September 15, a funeral Mass will be held at St. Thomas More Catholic Church, at 10:00 A.M, at 215 Thomas More Drive, Elgin, IL., 60123, and will be preceded by a morning visitation beginning at 9 A.M. The family and friends will meet at Memory Gardens Cemetery, in Arlington Heights, after the service for the burial, and a luncheon will be held at European Crystal, at 519 W. Algonquin Road, Arlington Heights, upon completion of the day's activities. This Life Tributes page has been created to make it easy for Family and Friends to share memories, photos and videos. For further information please contact Morizzo Funeral Home at (847) 752-6444.

Mark F. Koscak, of Elgin; went home to be with the Lord on September 10, 2018, at the age of 87, after battling Parkinson's disease, vascular dementia, stroke and more. Mark was born in Ljubljana, Slovenia in 1930, to Marko and Mary (Kononick)... View Obituary & Service Information

The family of Mr. Mark Koscak of Elgin created this Life Tributes page to make it easy to share your memories.

Mark F. Koscak, of Elgin; went home to be with the Lord on September...

Send flowers to the Koscak family.