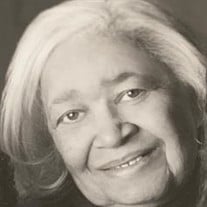 Mary Allene Whitlow Smith, of South Barrington, Illinois. Mary Allene Whitlow, born December 22, 1920 in Little Rock, Arkansas to Chester and Cornelia Whitlow the fourth of five daughters. Mary attended Little Rock public schools, Stephens Elementary; Gibbs School – 5th grade in a special program and graduated from Dunbar High School in 1939, a member of the honor society, and Dunbar Junior College and Johnson Business School. In Missouri she attended St. Louis Community College, and Webster College. In 1934 she joined First Baptist Highland Park where she was a Sunday school teacher, member of Usher Board, Recording Secretary and Director of Training. In 1946 she organized a children’s choir, which sang monthly in morning service, other churches and civic organizations. On October 17, 1952, she was joined in holy matrimony to Jesse Smith, a childhood sweetheart. To this union was born one son, Rodney Arthur. In December 1952 she re-located to St. Louis, MO where her husband was employed and Mary worked with nursery schools and Consolidated Neighborhood Services. She joined Olivet Baptist Church in 1953 where she served as Recording Secretary of the Senior Choir. In 1968 she moved to University City, MO and joined Baptist Church of the Holy Communion, Reverend B. L. Wilkerson – Pastor. She remained a faithful member until the death of her husband in 1995 after which Mary moved to Barrington, IL with her son. She joined the Barrington Area Council On Aging (BACOA) and Quentin Road Baptist Church, Dr. James A. Scudder – Pastor, where she worshipped faithfully until June 18, 2019 when Mary passed on to her eternal home. Mary was preceded in death by her parents, husband, and four sisters – Elsie, Mildred, Ruby and Helen. She leaves to mourn her passing her devoted son Rodney, a loving daughter-in-law Denise, two cherished grandchildren, Alexis and Reed, many nieces, nephews, cousins and many, many friends in Little Rock, AR, St. Louis, MO and Barrington, IL. Visitation will be begin at 10 a.m. until the time of service at 11 a.m. Monday, June 24, 2019 at the Baptist Church of the Holy Communion, 7515 Melrose Avenue, University City, MO. Memorials may be made to The Barrington Area Council on Aging

The family of Mrs. Mary Allene Whitlow Smith of South Barrington created this Life Tributes page to make it easy to share your memories.

Send flowers to the Smith family.