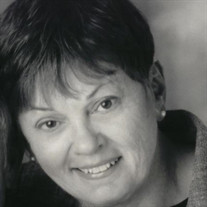 Patricia Ann Houlihan, 84, gained her heavenly wings on January 8, 2022 in Barrington, IL. Pat was the beloved wife to Francis J. Houlihan and devoted mother to Kathleen (Leroy) Janke, Mary (Tim) Mattoon, Maureen (Steve) Otten and Aileen (Kevin) Fitzgerald. She was the cherished grandmother of Maureen, Keeley, Katie, Nora, Zach, Tricia, Grace, Patrick, Lilly and Tim, and treasured great-grandmother of nine. Born December 1, 1937 to Lillian and Jack McCourt in Chicago, Illinois, Pat was an only child. She was raised Catholic at St. Killian’s Church, the same church she would later meet the love of her life and future husband of over 60 years, Francis “Fran.” Patricia and Francis were married on a beautiful, sunny September 12th in 1959 at their home parish. They welcomed their first daughter Kathleen in 1960, followed by Mary in 1962, Maureen in 1964 and Aileen in 1973. They raised their four girls in Oak Lawn, Illinois. As active members of the St. Germaine Parish, Patricia offered her seamstress talents and artistic eye by sewing large, decorative banners for the church that soon became a feature of St. Germaine. Patricia also served as a founding volunteer to St. Germaine’s chapter of the Courage program, an organization that assists women through unexpected pregnancies and single parenting. Ever the volunteer, Patricia also served as Girl Scout leader to her daughter’s troops. After their daughter’s graduated from beloved Mother McAuley Liberal Arts High School in Chicago, Pat and Fran made the move to Barrington, where they built their dream home in Barrington Hills. Pat devoted her time and talents to Advocate Good Shepherd Hospital, where she volunteered at the surgery desk and served the auxiliary for many years, even serving as auxiliary president for two years. The hospital’s current chapel and prayer garden were endowed by the Francis J. and Patricia A. Houlihan Foundation. As grandmother, Pat hosted every Christmas, attended every graduation and celebrated every milestone with her grandchildren. She adored her great-grandbabies , and brought warmth, understanding and love into the lives of her grandchildren. Pat was a friend to many animals over her lifetime and was even known to care for the occasional wounded wildlife. She spent her free time drawing, painting or sculpting with many of her pieces proudly displayed in family homes today. She enjoyed swimming and sewing and made a mean meatloaf, lamb stew and chocolate cake. She devoted her life to being a mother, grandmother and volunteer and her family and friends will forever remember her love and talents. Visitation will be held Tuesday, January 11, from 3:30 P.M. to 8:00 P.M. at St. Anne Catholic Church, 120 Ela St. (corner of Franklin and Ela St.), Barrington, Illinois 60010. Laying in State will be Wednesday, January 12, at 8:30 A.M. until time of Mass 10:00 A.M. Interment St. Michael the archangel Cemetery, Palatine. In lieu of flowers, please consider a donation to St. Jude Children’s Research Hospital.

The family of Patricia Ann Houlihan created this Life Tributes page to make it easy to share your memories.

Send flowers to the Houlihan family.