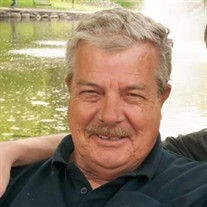 Steve Doerner Loving father of Jim (Kristin) Doerner, Christina (Andrew) Covert and Nick (Laura) Doerner; cherished grandfather of Cole, Riley, Violet, Lincoln, Kaitlynn and Molly; beloved boyfriend of Liz Anderson; devoted son of Stephen and Barbara Doerner; fond brother of Barb (Mike) Hemme, Bill (Karen) Doerner and Ed (Laurie) Doerner. Steve T Doerner was born on Valentine's Day in 1959 to Stephen and Barbara Doerner, despite the fact that the delivering doctor who had dinner plans that evening had politely hoped he would wait to be born. This became the theme of Steve's life. It didn't matter what plans anyone had in mind for him. He lived life on his own terms. He was born in Chicago and raised in Elk Grove. As Steve grew it became apparent that he was a tinkerer, a fixer, and unbelievably good at all things mechanical. His grandfather had been like that and throughout life Steve would revel in his grandfather's creations and inventions. His grandfather, his Dad and his Uncle started a business together called Doerner and Sons in 1957 and when Steve was in his 20's he joined on as third generation. Alongside his father they grew to be one of the top appliance repair companies in all of Chicagoland. Steve married in his early twenties and had 3 kids that he devoted his whole life to. From carrying baby bottles in his back pocket to building refrigerator box forts, his love and ambition for his kids was unmatched. By nature, he was a teacher and took every opportunity to teach his kids all that he knew. He was a "get your hands dirty and get in there" kind of guy. He was the kind of Dad that went to every school event, hung every picture, and proudly displayed every handmade memento from his kids. His kids were everything to him and he never hesitated to sacrifice whatever necessary to provide for them. Steve's heart was so big that it not only had room for all the love he had for his kids and family but also room for loving everyone he met. He was a Scoutmaster for the Boy Scouts and created the highest enrollment this region would ever see. He was a leader at Redmon's Towing where he worked weekends and had a lot of fun learning about towing, problem solving the various ways cars would end up, and teaching the other drivers that he knew and cared for. He took a mission trip to Guatemala with his brother, volunteered for the local Jacee's, donated to all kinds of charities, went on numerous motorcycle rides to benefit a multitude of non-profit organizations. He had various friends and friends of his kids who would stay at his house when they fell on hard times. His endless wisdom was given to all who needed his advice and he was always available to lend an ear or his mechanical hands to someone who needed a friend. When he met his girlfriend Liz, she brought a new perspective to his life and he started trying things he never thought he would. He became a foodie of sorts and enjoyed cooking with her. He got into unexpected hobbies like jewelry making and sewing. They went on various adventures together like excavating at a diamond mine or going on a motorcycle ride to protest school bullying. Liz became his best friend and he loved her dearly. The true beauty of Steve's life came when his grandkids were born. Each of his 6 grandkids had their own unique bonds with their "Papa Pops" and he spent the last years of his life loving them, spoiling them, taking them on adventures, and teaching them how to fearlessly live life on their own terms like he had. Steve was unique and deeply loved by all who mattered to him. He was a father unmatched in this world with love and devotion. He was the greatest Papa to his grandkids. He was honest, ambitious, smart, fun, and most of all he was the pure embodiment of unconditional love. He was our rock, our moral compass, and the heart of our family. He will be deeply missed until our family chain is linked again someday. We love you Dad. Rest easy, Pop. Visitation and service will be private for family only. The visitation and service will be livestreamed though our website under the media/pictures and videos tab for those of you wishing to participate. The visitation will be held on Thursday, December 3rd from 3:00 P.M. till time of service at 6:30 P.M. ** Due to the Covid-19 pandemic, everyone is asked to be patient and abide by the number of visitors allowed inside the funeral home. Everyone is welcomed, but we ask that you keep your visit short so that all who wish to pay their respects will be able to do so. Please note that all visitors are required to wear face masks to enter the funeral home. ** In lieu of flowers help Steve bring Christmas to kids in need by donating to Toys for Tots . For further information please contact the Morizzo Funeral Home and Cremation Services at 847.752.6444. The family has created a Life Tributes page; at MorizzoFuneralHome.com to share memories, photos and videos.

The family of Steve Doerner created this Life Tributes page to make it easy to share your memories.

Send flowers to the Doerner family.