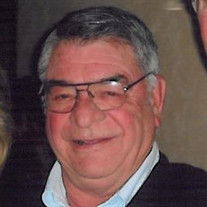 Vernon Duane Benda, 87, of Lake Barrington, Illinois. Vernon Duane Benda passed away peacefully on September 26, 2019. He was born November 1, 1931 in Brush, Colorado. He was the oldest of six children born to Vernon and Marjorie Benda. He attended Cambria High School in Cambria, Iowa, where he played on the basketball team and fell in love with Marilyn JoAnn Sheets. After graduation he enlisted in the Air Force where he served during the Korean War. In 1951 when Vern was stationed in Shreveport, Louisiana, JoAnn hopped a train, telling her parents she was going to visit her sister in Chicago. Instead, she headed south and they eloped. They welcomed their first child, Cheryl in 1952. A few years later, Vern and JoAnn returned to Iowa, settling in Des Moines. Their second daughter, Nancy, was born there in 1956, followed by their third daughter, Leslie in 1959. Vern enjoyed a 44-year career as an electrician at the Meredith Corporation. Vern was a devoted father and grandfather. He loved to hunt and fish, especially with his grandsons, Charlie and Max, and his brother Skip. He was a talented woodworker who made toys for all of his grandchildren. His granddaughters, Taylor, Whitney, Laura, and Margaux cherish the doll furniture he lovingly crafted. They have now been passed down to his great granddaughters Olivia and Callie. Vern was an exceptionally warm, friendly, and unpretentious person. He loved people and had a talent for connecting with others. He even made new acquaintances feel like old friends. He spent his last three years at Lake Barrington Woods, where he loved making new friends and playing poker. He is preceded in death by his wife JoAnn, his daughter Leslie Jensen, son-in-law Mitch Paul, and his brothers Roger “Skip,” Dean, Gary, and Danny. He is survived by his daughters Cheryl (Jim) Laurence and Nancy Paul; his grandchildren Taylor (Steve) Shanfeld, Whitney (Tony) Konstant, Charlie Paul, Max (Brie) Paul, Laura Jensen (Stephen Pulvirent), and Margaux Jensen; his great granddaughters Olivia and Callie Shanfeld; his sister Patty Adams; as well as many cherished nieces and nephews. A celebration of life will be held at Lake Barrington Woods, 22320 Classic Ct. in Lake Barrington on Saturday, September 28, 2019 at 11 a.m. Another celebration will take place in Des Moines, IA in April 2020. In lieu of flowers, please consider a memorial contribution to Freedom Service Dogs of America or The American Heart Association.

Vernon Duane Benda, 87, of Lake Barrington, Illinois. Vernon Duane Benda passed away peacefully on September 26, 2019. He was born November 1, 1931 in Brush, Colorado. He was the oldest of six children born to Vernon and Marjorie Benda. He... View Obituary & Service Information

The family of Mr. Vernon D Benda of Lake Barrington created this Life Tributes page to make it easy to share your memories.

Send flowers to the Benda family.