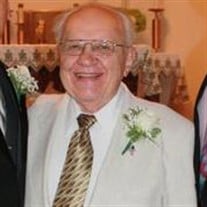 Victor J. Kay, 90, of Schaumburg, Illinois Victor Kay, born October 2, 1929 lived life to the fullest for 90 years. Loving and devoted husband to Lorraine, nee Pruszynski, for almost 65 years, loving father to Karen (Mark) Skorczewski, adoring grandfather to Lisa (James) VanOverbake, Sara (Efren) Galvan, and Kelly Skorczewski, doting Papa to Lukas and Nolan VanOverbake, Gianna, Noah Victor, and soon to be Kalea Galvan. Youngest of 4 children of John & Bernice Ksiazkiewicz: the late Adeline (the late Frank) Smolka, the late Edmund (the late Irene) Kay, Lottie (the late Edward) Pilarski. Vic was raised and received sacraments at Good Shepherd National Catholic Church in Chicago. Due to difficult economic times, the family moved to and lived on their farm in South Haven, Michigan for 5 years. Moving back to Chicago, he worked in the family Royal Blue grocery store. He proudly served in the United States Marine Corps in Korea from 1951 to 1952. After being honorably discharged, he returned to Chicago. He met his wife, Lorraine, through church choirs. After a little over a year of courtship, they married on June 12, 1955. He then started working as a teller for Liberty Savings, working his way up to Vice President. He left Liberty to open Kay Realty, Inc. which later became Century 21 Kay Realty, Inc., with his brother Edmund on Harlem Avenue in Chicago. Later, opening a second office in Park Ridge. In 1977, he became sole owner of the company. Eventually, he sold the Harlem Avenue office and operated the office in Park Ridge until the company merged with Century 21 Langos and Christian in Mount Prospect until he retired from real estate. Vic led an active life with lifetime membership in the 1st Marine Division Association-Chicago Chapter serving as Treasurer, Chicago Society, Kiwanis, Freemasons, as well as many real estate related organizations and committees. Vic and Lorraine lived in Chicago, Niles, Park Ridge. In 2002, they moved to and enjoyed life at Friendship Village Retirement Community, in Schaumburg. He enjoyed playing endless Monopoly games with his granddaughters and attending their sport events and dance recitals. He also made many happy memories traveling to Mexico, Poland, Russia, Hawaii, Washington DC as well as Disneyland and Disney World, with frequent trips to South Haven. Having spent 5 years on a farm as a youngster, he enjoyed gardening, watching and feeding the birds (and a few unwelcome squirrels). He liked to read, watch war movies on TV, play solitaire on his IPad, and make weekly shopping trips to the local grocery stores. He also looked forward to spending time with family members’ “fur-babies”. In lieu of flowers donations to Semper Fi Fund , All Saints Cathedral Parish "Good Samaritan Fund" or the American Heart Association would be greatly appreciated. Envelopes for all three will be available at the funeral home. Visitation will be on Friday, January 10 from 3PM to 9PM at Morizzo Funeral Home, 2550 Hassell Road (NE corner of Barrington Road & Hassell Road), Hoffman Estates. On Saturday, January 11, visitation will take place at All Saints Cathedral National Catholic Church, 9201 W. Higgins Road, Chicago starting at 10AM until Mass at 11AM. Burial will be at All Saints Cemetery adjacent to the Church. This Life Tributes page has been created to make it easy for Family and Friends to share memories, photos and videos. For further information about this funeral; please contact the Morizzo Funeral Directors at 847.752.6444. Arrangements entrusted to Morizzo Funeral Home and Cremation Services, 2550 West Hassell Road, (Northeast corner at Barrington Road), Hoffman Estates, Illinois 60169.

The family of Mr. Victor Kay of Schaumburg created this Life Tributes page to make it easy to share your memories.